About the work of Steven Holl in Rhinebeck

The work of the extraordinary American architect Steven Holl could be summarized by the set of pieces that he has built near New York, in Rhinebeck, a place that looks like a paradise, an Arcadia. Because it really is just that, an Arcadia, nature in which our architect has implanted his pieces. A set of “classic” pieces of the highest order. The Master investigates on various spatial themes in each of them.

The Oxford dictionary defines Arcadia as “relating to an idyllic country scene or way of life origin from Arcadia, a region of Southern Greece.”

In classical literature Arcadia is defined as “locus amenus.” The first who mentions Arcadia is Virgilio in Las Bucólicas: Arcadia as a lost world of idyllic charm. From Ovidio to Petrarch, from Cervantes to Gongora, they all talk about it. And Goethe in his Italian Journey, and Nietzsche in Human, All Too Human.Giorgione paints Arcadia in his Tempest, and Nicolás Poussin in his Et in Arcadia Ego (Les Bergers d’Arcadie). Although Steven Holl prefers to link these pieces to a luminist architecture represented by the Moonlight Landscape painting by Washington Allston of 1819, today at the Fine Arts Museum in Boston.

“Today, the freedom to embrace spatial energy has the potential to bring the joy of innovative architecture to anyone” and he finishes with “A new Luminist architecture could inspire Works of experimental light and spatial energy that simultaneously preserves and nourishes the natural landscape crucial for our future”.

And with these ideas, he has set up this new Arcadia.

Can an artist create his own world? Can an architect build his own environment, and inhabit it and enjoy it? This is what many of our masters did: Soane built his own house in London, which we now know as a house-museum. And Melnikov is not far behind him with his house in Moscow. And how can we not mention here Le Corbusier’s cabanon?

With that same quality, the quality of the masters, Steven Holl has created his own paradise, his Arcadia in Rhinebeck, near New York.

EX OF IN HOUSE

INTERSECTION. Because that is what this piece is, a wonderful intersection of spheres, of parallelepiped spaces with spheres. When we see the models, the rigor of the operation is understood even better.

From the entrance, through an incredible wooden sphere, to the opposite corner at the top, with the floor and the dihedral in transparent glass on the circular traces.

The photographs available are incapable of translating the conceptual and luminous clarity that these constructed spaces have. Steven Holl rightly points out that these are spaces to be lived in.

The image of Steven Holl in the spherical space while the project was under construction is very beautiful, in that image, as it appears on the cover of the Korean magazine SOONGSIL UNIVERSITY HYUNGNAM HALL of Seoul, the raw structure is shown before being covered. It seems incredible that so many things can be said with so little. This really is “less is more.”

The Ex of In House explores a language of space, aimed at inner spatial energy strongly bound to the ecology of the place – questioning current clichés of architectural language and commercial practice. The house is a built manifestation of the research and development project Explorations of “IN” under development at Steven Holl Architects since June 2014. The house was made almost entirely from raw materials by the builders, crafting solid mahogany window and door frames, a mahogany stair, and birch plywood walls. There is no use of sheetrock. The spherical intersection space was also crafted in curved, thin wood layers. All-natural oiled wood and plywood interior finishes are part of the arte povera materiality and economy of this place of wabi-sabi.

Among the many models, model No. 5 expresses very well what he has built, beautiful and clear. Or the stunning drawing on page 15 titled “spherical intersections.” And, when the architect, trying to explain the function, tells us: “The house has no bedrooms but sleeps five people comfortably,” our memory asks: do you remember the bedroom in the Farnsworth House by Mies or in the Ville Savoy by Le Corbusier? Well, me neither. And indeed, who would need to.

The lesson on the spherical space, most likely learned from the Pantheon in Rome, is recited here with other dimensions and with other music, and the result is very beautiful and universal. I think this piece will be a part (it should have already happened) of the history of architecture.

ADDITION. If the previous piece was an intersection operation, this one is an addition operation. The architect transforms a hunting hut by adding 7 steeples of light, achieving very beautiful spatial results. He refers to them as a “metaphysical foundation” and I think he’s right. He excavates the corners with ancient wisdom, transforming “trihedral of darkness” into “trihedral of light.” Where there would be more darkness, he adds more light. Black on the outside, white on the inside. This is the house where students live and work, which Steven Holl significantly calls a reserve.

This is the house where Steven and Dimitra live with their daughter, Io. An incredible piece, a simple cube with a triangle of light at the top. A structural intervention on an existing piece

“A hollow charcoal cube is warped by distorting forces opening a triangle of light from above. This cubic wooden structure is linked by an exoskeletal steel ‘L’ to an existing stone ‘U’.”

In this project he sculpts the “trihedral of darkness” with light one more time. And he uses as a reference the images of the Basque sculptor Eduardo Chillida who made that same operation inside a mountain. Here, the dialogue between shadows and light is more alive, more visible, more architectural. He breaks all the “trihedrals of darkness” to flood them with light. What Bernini masterfully did in his Baroque architecture, drunk in forms, is done here by Steven Holl, also masterfully, in a very precise and concise way.

Of small dimensions, as if it were a small observatory facing the landscape, here is where the master retires to, isolation, to think, draw and paint, to be in silence. The hut of watercolors “in solitude.” As if it were the Abbot Laugier’s cabin, the piece floats in the forest like a dream come true. It is easy to understand that here, our architect can concentrate (very well) to generate new and deep architectural thoughts.

The new building for the archives of our architect’s foundation is, once again, a “very Steven Holl” and beautiful piece. One can only imagine the enormous joy it will bring being able to consult and study his original watercolors, drawings and models.

The archive includes over 1,200 models, 3,300 books, 20,000 individual watercolors and assorted furniture, artwork, correspondence, drawing sets, material samples and photographs. The new building will also serve students of the foundation’s summer architecture residency, which takes place in the month of July and is already housed on T2 Reserve.

After seeing these buildings in person, I must point out that none of the photographs that have been published do them justice. I hope that someday one of the best architectural photographers in the world comes to Rhinebeck to take an accurate graphic testimony of what happens here.

I consider Steven Holl to be one of the real masters of contemporary architecture. His works are all very beautiful and supported by a clear and profound thought.

“The essence of a work of architecture is an organic link between concept and form.” Could he be any clearer?

Or the beautiful quote by Robert Kelly that he uses in his book: “to offer this land to heaven and see what comes,” which is what Steven Holl has done in each and every one of the pieces of this place, of this new Arcadia.

After an unforgettable visit to that wonderful place with Steven, Dimitra and little Io, and Spanish architects Miguel Quismondo and Jacobo Mingorance, on a sunny June 3, 2019. 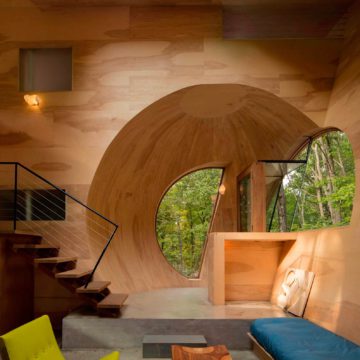 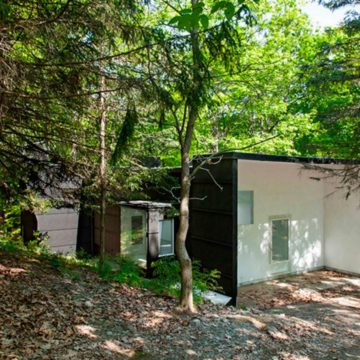 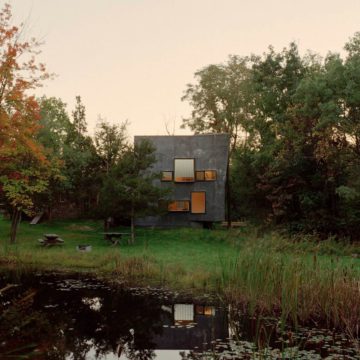 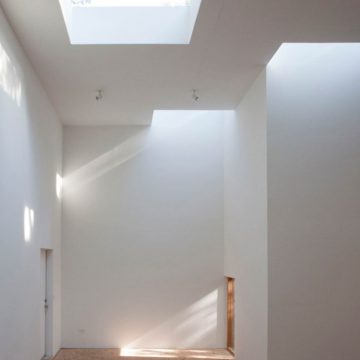 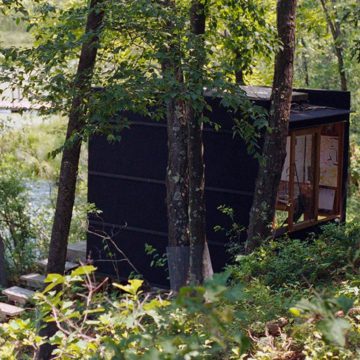 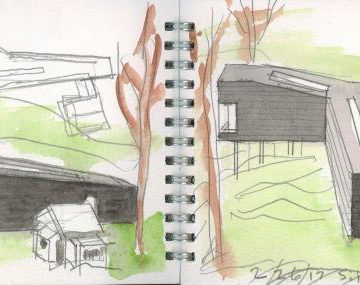 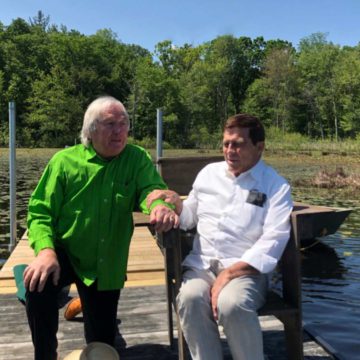