The Spanish architect Alberto Campo Baeza has been awarded the BigMat’s INTERNATIONAL ARCHITECTURE AWARD’s GRAND PRIZE for his office building in Zamora, executed in collaboration with architects Pablo Fernández Lorenzo, Pablo Redondo, Alfonso González Gaisán and Francisco Blanco Velasco. The Special Mention for Young Architects was awarded to the French architect Samuel Delmas for his building in Nozay.

The group BigMat International SA, with its central headquarters in Luxemburg and a presence in seven European countries: the Walloon and Brussels-Capital regions in Belgium, the Czech Republic, France, Italy, Portugal, Spain and, most recently, Slovakia, sponsors this international prize, the “BigMat’15 International Architecture Award”.

In the view of the judges of this coveted award, the common denominator was the outstanding quality of all the projects. The panel of judges for the BigMat International Architecture Award, chaired by the Spanish architect Jesús Aparicio, comprises architects of renowned prestige from each of the participating countries: Henri Ciriani (France), Francesco Dal Co (Italy), Manuel Aires (Portugal), Antonio Ortiz (Spain), Olivier Bastin (Belgium), and Martin Rajnis (Czech Republic).

750 projects were presented in this 2015 edition, with an initial selection of 100 participants, out of which 18 finalists were selected, 3 from each country. After that, the 6 national prize-winners were chosen and from them the special prize for Young Architects, which went to Samuel Delmas from France, and the Grand International Prize awarded to Campo Baeza. Participants in this year’s edition included renowned architects Souto de Moura, Brandao, Mangado, Campo Baeza, Nieto-Sobejano, Paredes-Pedrosa, Linazasoro, RCR, Vázquez Consuegra, Perrault, Odile Decq, Natalini and Kazuyo Sejima with the Louvre Lens.

The BigMat International Architecture Award has become a scenario that showcases and is sensitive to current trends in contemporary architecture. Alongside buildings designed as a meeting point to promote interpersonal relationships, are other constructions of simpler design, which are prepared to surrender the limelight to the beauty of nature. 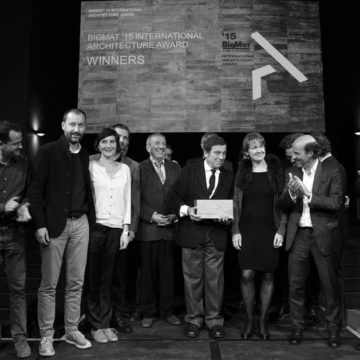