CONSERVATION AND STORAGE FACILITY FOR THE LOUVRE MUSEUM IN LIÉVIN

ROGERS STIRK HARBOUR will built the Conservation and Storage Facility for the Louvre Museum in Liévin after an ex aequo first prize with Alberto CAMPO BAEZA + Raphaël GABRION.

Richard Rogers and Alberto Campo Baeza with Raphael Gabrion, were the ex aequo winners of the public competition in France for the new extension to the Louvre Museum in Liévin. The jury first selected 5 of the designs presented by over 200 architects. It later chose 2 projects from those 5, those presented by Campo Baeza-Gabrion and Rogers-Stirk Harbour + Partners. And finally, after awarding the two projects ex aequo, they took the decision to build the proposal put forward by Rogers.

Liévin is adjacent to Lens, where another extension of the Louvre, the new SANAA building, is located, both very close to Paris. The new building will house large restoration workshops, exhibition halls and offices, as well as large, conditioned storage areas for the numerous reserves which the Louvre currently has.

The landscape of Liévin is dark, almost black, having once been a prosperous coal and anthracite mining centre. Indeed, next to the site stand two sturdy coal chimney stacks as visible witnesses to that past and symbols of the surrounding area.

The function of the new building is basically that of adequately storing the huge amount of valuable artworks, around 250,000, which are currently kept in the vast basements of the Louvre. The need to provide suitable facilities for all these treasures is what prompted the directors of the Louvre and the French state to hold this major competition. The success of the construction of the first extension of the Louvre by SANAA in Lens led to the decision to build this second extension in Liévin, in the immediate vicinity of Lens.

Le bateau îvre: the building of Campo Baeza and Gabrion.

The building of Campo Baeza and Gabrion appears on the landscape like a great ship, very horizontal and dark, conjuring up the idea of a fortress capable of securely guarding those treasures. The motto with which they won the competition was le bateau ivre (the drunken boat), echoing the title of the well-known Rimbaud poem as well as the precision of its poetic ABAB rhythm. A large, dark podium housing all the workshops and services, with the cubic part of this great warehouse emerging like the chimney of a great boat. While the image of the boat is appropriate, even more so is the dry dock element, because that is precisely how it appears: a boat being repaired in dry dock. Repairing the works of the Louvre.

In functional terms, the spatial structure created by Campo Baeza and Gabrion is one of extreme rigor and precision, just like Rimbaud’s poem. All the requirements of the complicated program have been carefully fulfilled and everything placed in order. An order that these architects defend as one of the essential characteristics of Architecture.

Campo Baeza recalled with emotion the story of Bernini and his trip to Paris to see the Louvre being built- a journey wonderfully described by Chantelou in a highly recommended book for all architects. And how, after three projects, the building was finally constructed by Perrault. There is merit in looking again at Bernini’s beautiful drawings for Paris. And as Campo Baeza explains, had they won the competition, this possibility of building the new Louvre, it would have somehow or other removed the thorn from the side of the great maestro. And, while it will not come to fruition, its authors have dedicated their project to Bernini.

N.B. Alberto Campo Baeza has reminded me to mention the team of people working with him, headed up by Elena Jiménez and Tommaso Campiotti, with María Pérez de Camino and Imanol Iparraguirre. Not forgetting Ignacio Aguirre and Alejandro Cervilla, as well as Raphaël Gabrion’s collaborators in Paris.

And finally, three very beautiful images very appropriate to the building have come into being: one with the new building as background to Millet’s The Angelus, looking as if it had always been there. Another of the building as painted by Monet in his Soleil Levant. And the third, that of a boy painted by Chardin playing with the model of our building. It goes without saying that all three works are housed in the Louvre Museum. I have suggested that they publish the three images as postcards to send to friends. 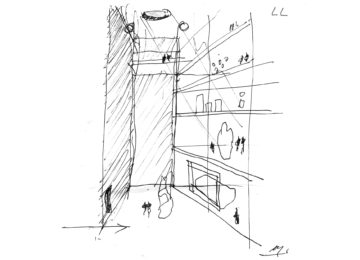 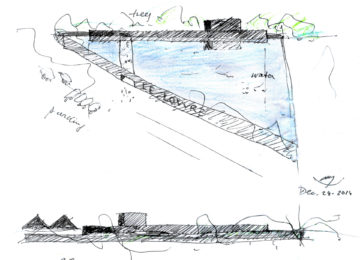 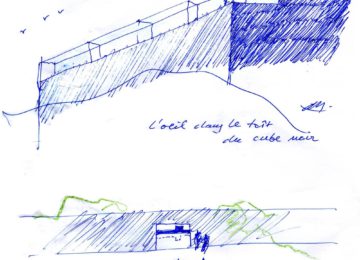 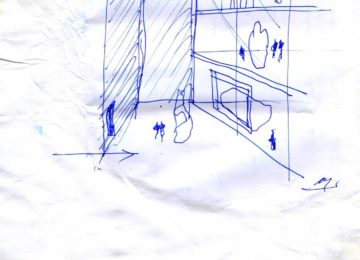 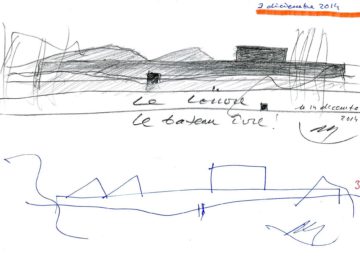 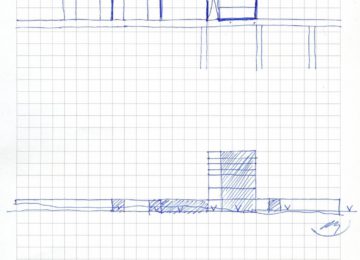 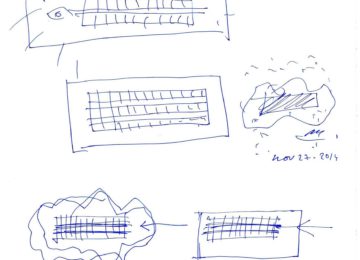 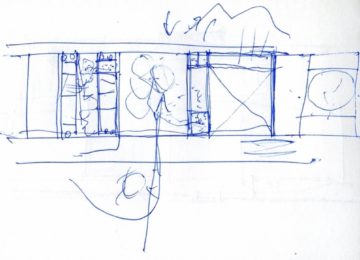 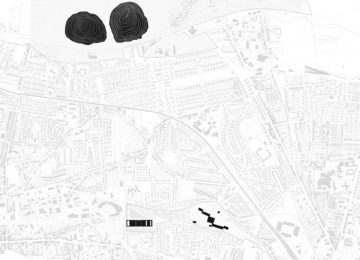 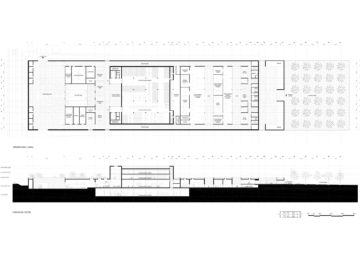 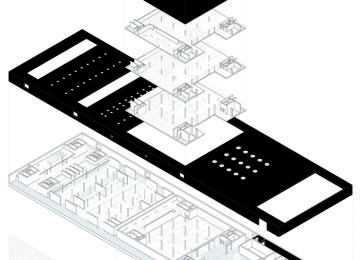 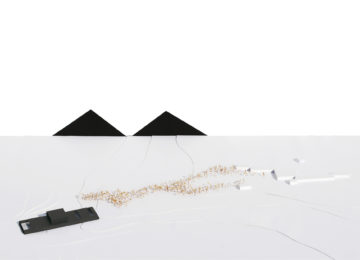 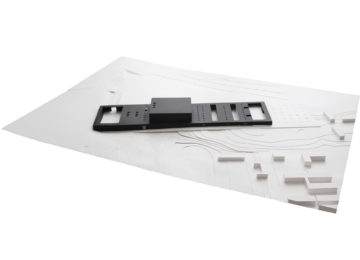 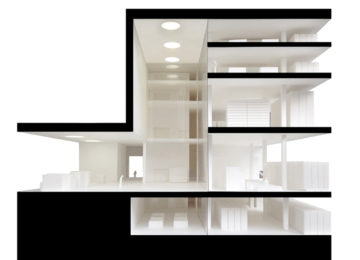 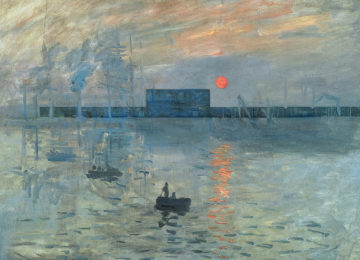 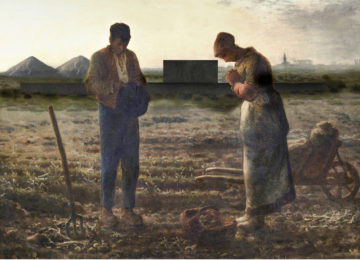 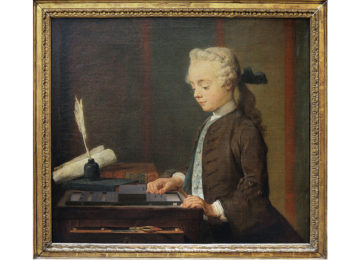 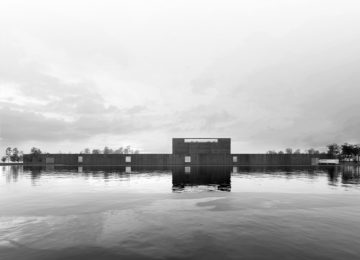 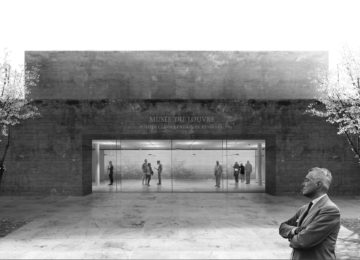 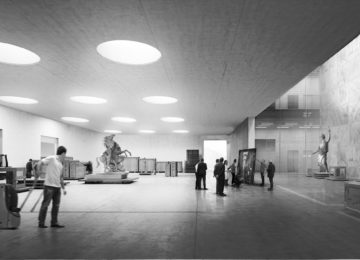 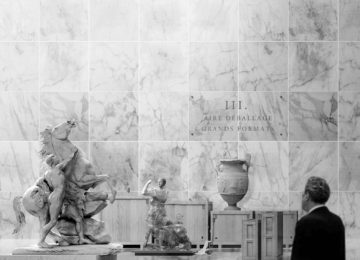 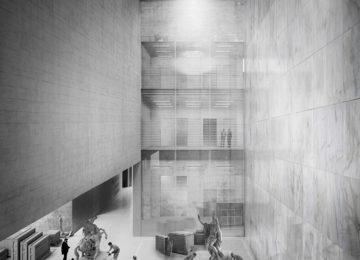 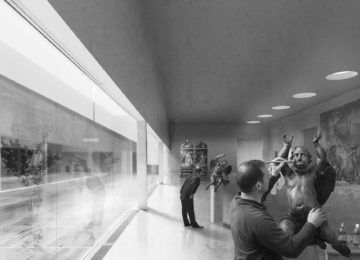 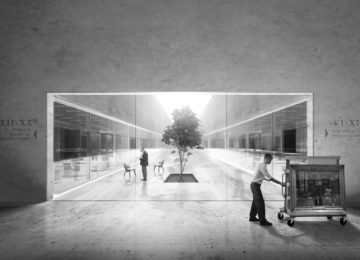 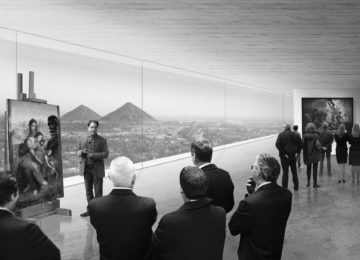