An enclosure to house Picasso’s “Guernica” was to be created in the town of the same name.

It was decided that instead of creating an isolated piece, that the intervention would involve the recomposition of the city. A reconstruction of the town destroyed by bombardment, the inspiration of the emblematic work.

Three buildings are planned to join the city with the Casa de Juntas of Guernica: an auditorium, an exterior jai alai court, and another interior court, in which “Guernica” is placed behind the front wall of the handball court. All of the elements have porticos which continue those existing in the old town. In this way, stone is the only material used. 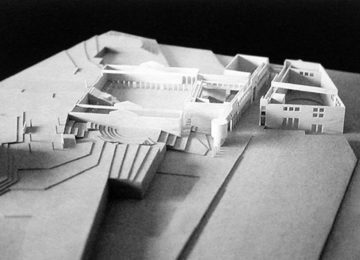