Just imagine what an incredible situation: to be awarded the task of doing the set designs for the Greek theater of Syracuse, a divine place. Previous designers of the scenography there include Rem Koolhas o Aldo Pommodoro.

All this as a sequel to an unforgettable trip to Syracuse.

I
In Syracuse one feels born again.

Like Asplund, when he discovered the immense beauty of the starry Sicilian sky and transported it body and soul to that star-flecked Prussian blue ceiling of the Skandia Cinema in Stockholm.

Like Caravaggio, fascinated by that space of unparalleled beauty between natural and artificial, that quasi-sacred vertical cave, who baptized it forever as the ear of Dionysus.

Like Alvar Aaalto who, fascinated by the curved forms of the cavea of the Greek theater, almost literally transferred them to some of his projects.

In all of them, and in us, the obsession to catch, to halt, to suspend time.

II
And now, I am discovering Syracuse. This is my first visit to a city of absolute beauty, stunning in nature: a city that belonged to the Greeks and was never to lose its Greek aroma which, blended with Roman elements, creates an intoxicating perfume that included the Peloponnesian War. Because there, in Syracuse is where the Greeks lost their last battle and surrendered in an unconditional embrace to an overwhelming Rome. In Syracuse one feels born again.

Syracuse is a paragon of Beauty. If I always cry when I enter the Pantheon in Rome, I must confess that in Syracuse I cried like a child -so much Beauty, there is so much beauty there! Suddenly one feels born again.

The semi-elliptical Duomo Square, with its perfect proportions and dimensions, presided over by a Cathedral whose walls still feature the very beautiful Doric columns of the temple erected there in past times, still ever so present.

The ear of Dionysus, an impressive space carved by rainwater and touched the very soul of Caravaggio.
And a Greek theatre, whose location against the backdrop of the sea maintains it alive, as if time had stopped still, where the tragedies of Aeschylus, Sophocles Euripides and Aristophanes are still performed every summer.

III
So I was offered the possibility of looking after the mise-en-scene of the Greek theater for the summer of 2015. The mediator was Alessandro Mauro, a young Italian architect under whose wise guidance I visited the place. Alessandro Mauro writes beautiful books and with a group of young Italian architects is attached to a splendid School of Architecture in Syracuse that will soon be talked about. And it is he who translated into Italian The Built Idea, my first published collection of texts.

I have designed a space with the sobriety of Greece and the beauty of Rome. A simple, flat, horizontal platform that seems to float on stage. A wrinkled surface, like a cloud that floats on the first platform and tangibly defines the intermediate space. A plane folded to the back that evokes the sea.

Nothing more and nothing less.

The horizontal platform will have openings and trap doors where the actors enter and exit. The wrinkled surface may take on different forms, from Saint Teresa’s cloak by Bernini to a simple wrinkled paper. The folded plane of the sea may change color in hues of blue and green.

We also designed the dresses for the characters of Aristophanes’ The Clouds. A golden dress, folded Miyake-style. A silver-grey dress, with large silvery scales. A translucent white organdie dress.

Yet another occasion to enjoy with architecture. Because, after all what is an architectural space if not a theatrical space?

N.B. In this marvelous project I was assisted most efficiently by Elena Jiménez. 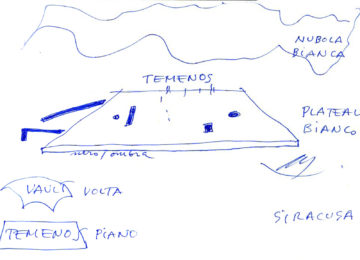 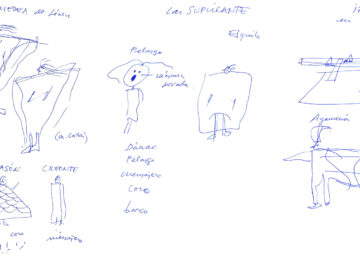 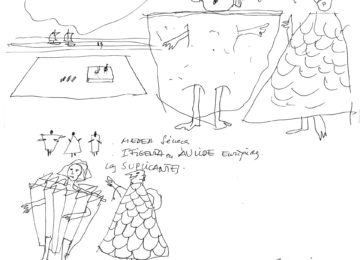 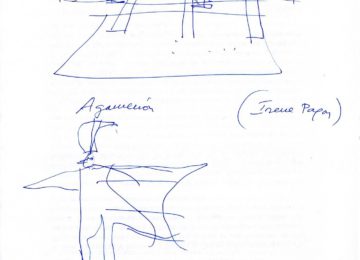 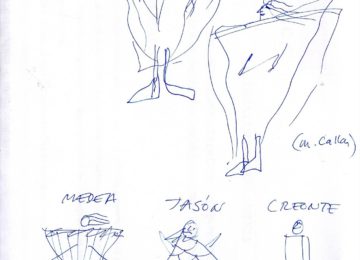 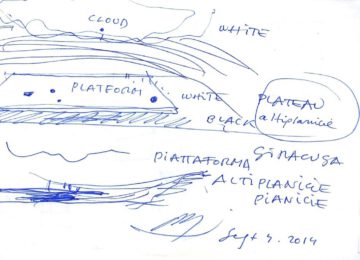 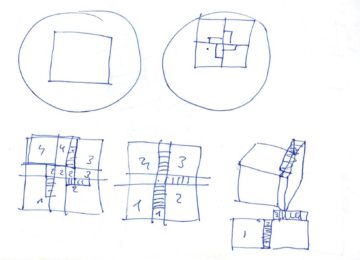 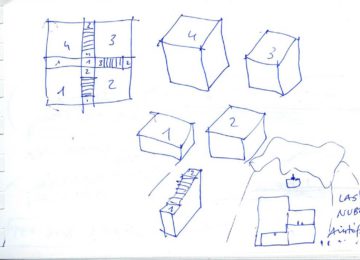 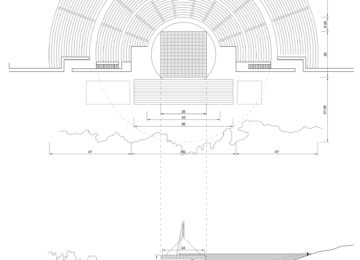 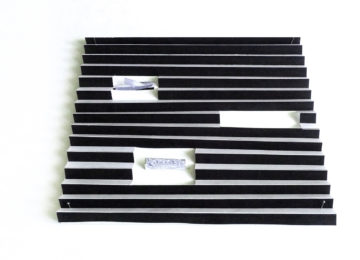 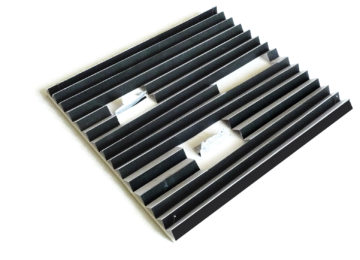 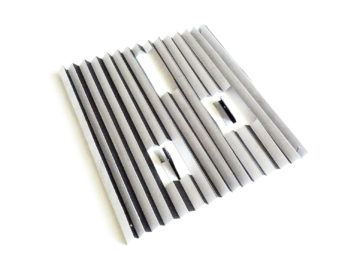 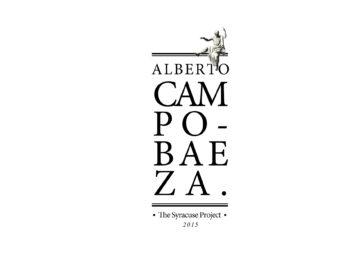 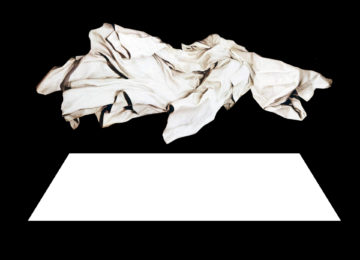 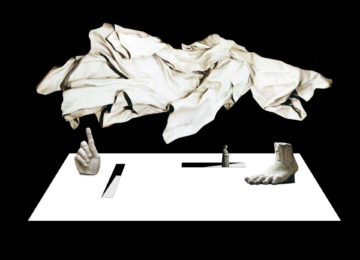 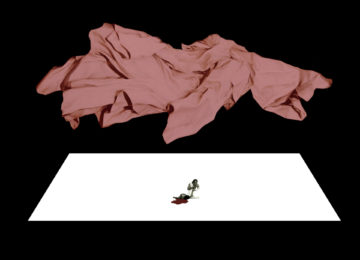 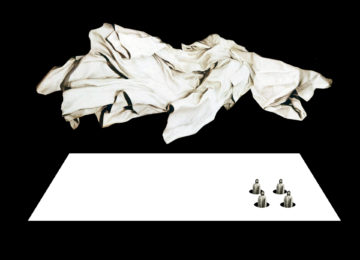 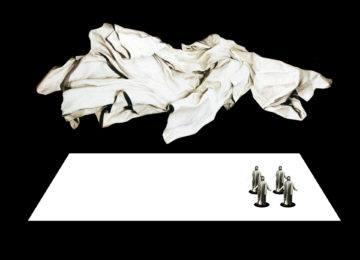 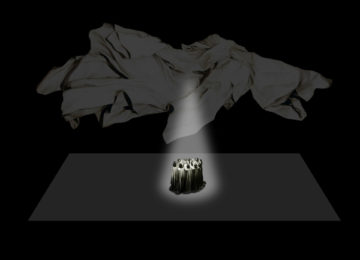 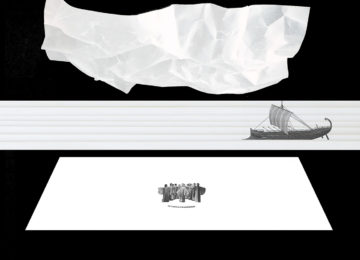 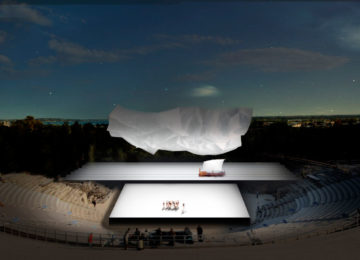 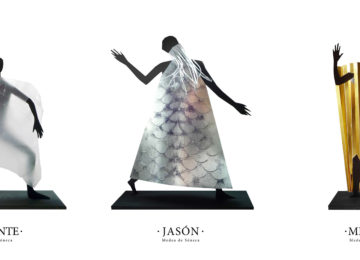